World Championships Beijing 2015: RT Journal by Sarah Klein
I am sitting on the plane flying from Hong Kong to Melbourne after an amazing experience at my first World Championships. I have broken the trip up into sections below to try and capture what my experience was like and how I coped running a marathon in the Beijing summer.
Wakayama
It was exciting to get to the team camp, I got there the final night that athletes could arrive and it was great to spend one night with all the team together. I enjoyed heading out to the track to watch what was the final track session for the athletes competing early in the program, the local Japanese really looked after us with their training facilities. I got a big shock on my first run in Japan, it was 32 degrees and 94% humidity and after coming from the winter in Melbourne I was certainly questioning my ability to deal with the heat in the race. Luckily the weather in Beijing was slightly cooler and the humidity was much lower. It was quiet in the camp after the first and second wave left for Beijing but I was grateful to spend time with Eloise, Sinead and Julia and stay out of the hype in Beijing. The rest of the time in Wakayama was a matter of completing my final long run and a couple of light tempo sessions. The Aussies took over the only local cafe with half decent coffee to cheer on those competing. 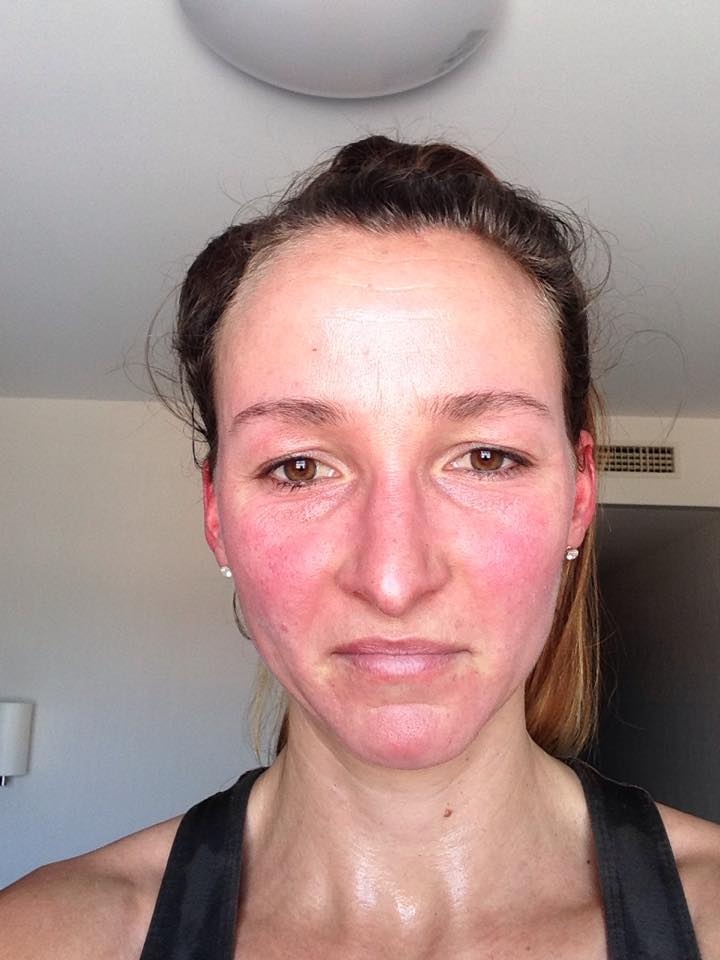 Picture: Red face after my first run in Wakayama

Picture: Aussies taking over local Wakayama cafe.
Race preparation
I obviously knew coming into the Championships that the women's marathon was on the final day of competition, but it was still difficult to keep focused on my goal when other athletes were finishing up, sight seeing and enjoying all the food that I wanted to be eating. I tried to keep to my pre race routine as normal as possible with regular meals and runs, some local shopping and getting to the track to cheer on my team mates, but it was still difficult given the lack of things to do compared to my usual busy life of full time work and training. It's funny how the race seemed to take forever to get to and before I knew it, it's all over and we're planning the next. 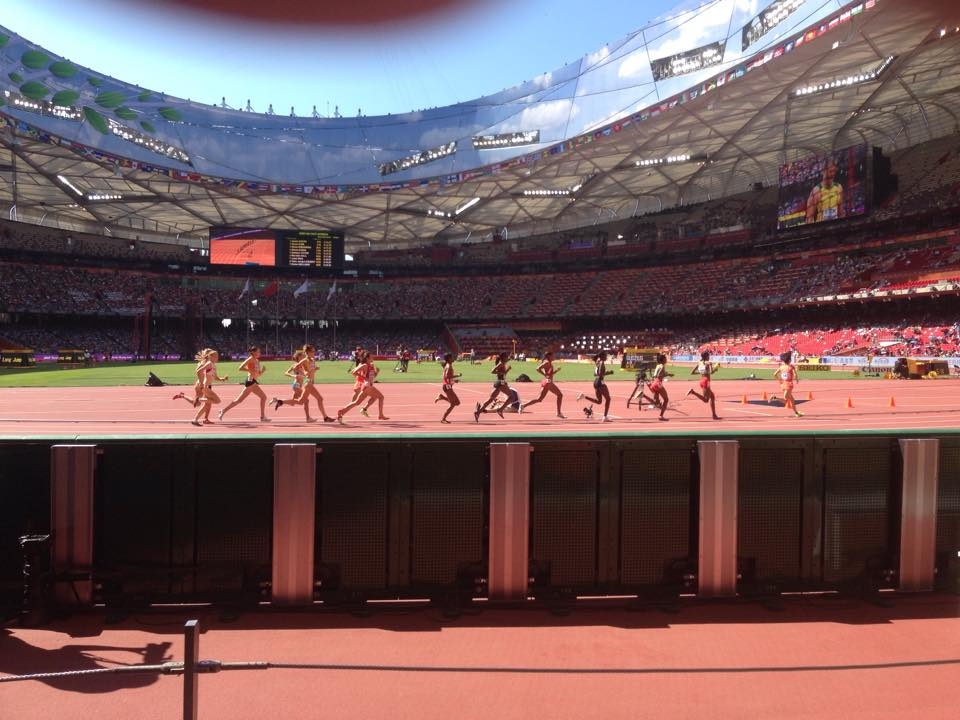 Picture: Cheering on fellow Aussies at the Birds Nest.
Hydration
Hydration during the race was always going to be a key component to get right in this marathon. Having adequate hydration would keep my core temperature regulated, blood volume sufficient and salt levels good enough to keep my muscles from cramping. Knowing that I would have my drink bottles every 5km and water stations in between each, I planned to consume something roughly every 2.5km. I mixed my drink bottles with normal strength Hydralyte Sports for the first 4 stations and double strength Hydralyte Sports for the last 4 stations. I was glad I consumed quite a lot of liquid in the first half of the race because I always find it difficult to drink, run and breathe the further into a marathon I get. I had Hydralyte Sports to help hydrate after the race and was pleased not to cramp once, especially once I saw the agony it caused for Julia post race. 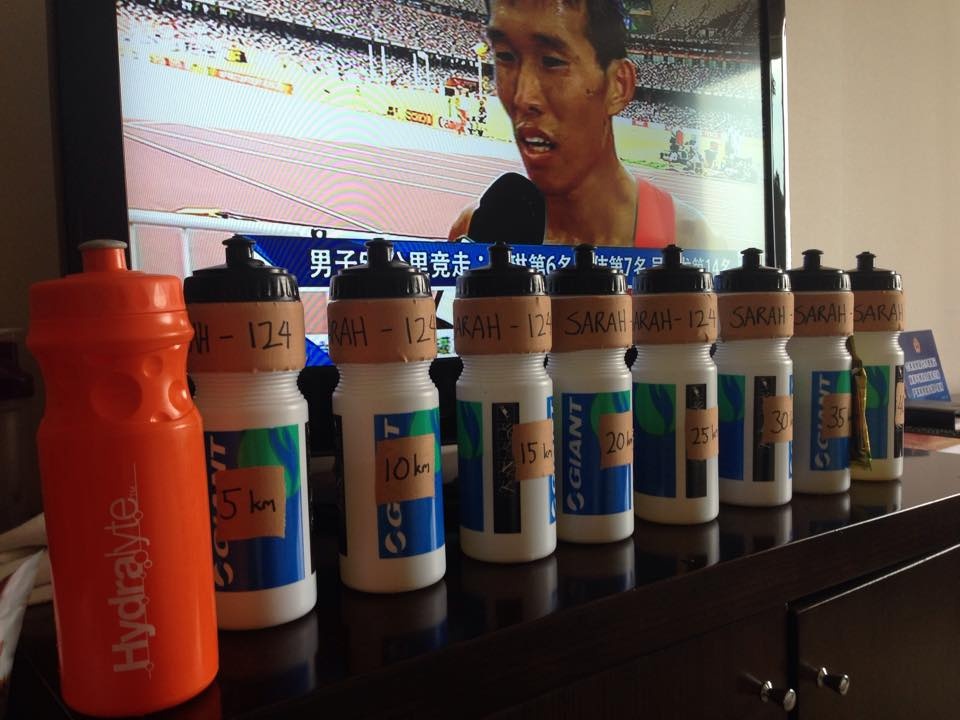 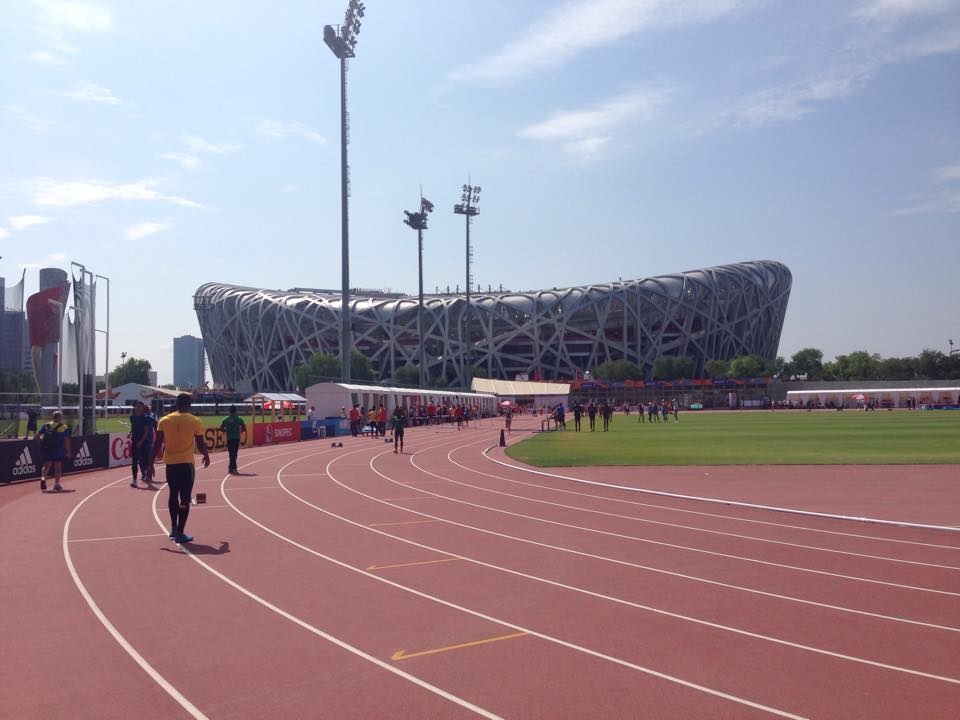 Picture: Warm up track pre race.
The Race
I was surprised to realise after the race, that after finishing 23rd, I was placed 46th after the first 5km. This took me a little by surprise when the gun went and I quickly fell behind the early pace. My race plan was to keep my splits as even as possible and try to finish strong. Running an even paced race allowed me to move through the field and pass people in the latter stages of the race and it is always a much better feeling knowing you are passing people and not the one being passed. I found my rhythm throughout the first half but inevitably hit a rough patch around 27km, I like to repeat a mantra to myself throughout each marathon and the one I was repeating, in between Dear Future Husband, was 'It's not how you feel, but what you do that counts' (inspired by Andre Agassi's book Open that I read the week before the race). I really felt as though I was slowing at 35km, but as we neared the Birds Nest there were some familiar voices out on the course that kept me going. I must say in city of 22 million people, the noise coming from the crowds was minimal, the Chinese were not very vocal but I remember them taking a whole lot of photos as we ran by. The course was quite spectacular and took in some of the most famous landmarks in Beijing city, for me though, the highlight of was running down the Olympic Boulevard and finishing in the Birds Nest stadium in front of family and friends, it took 42.1km to get there but the last .1km was certainly worth it! 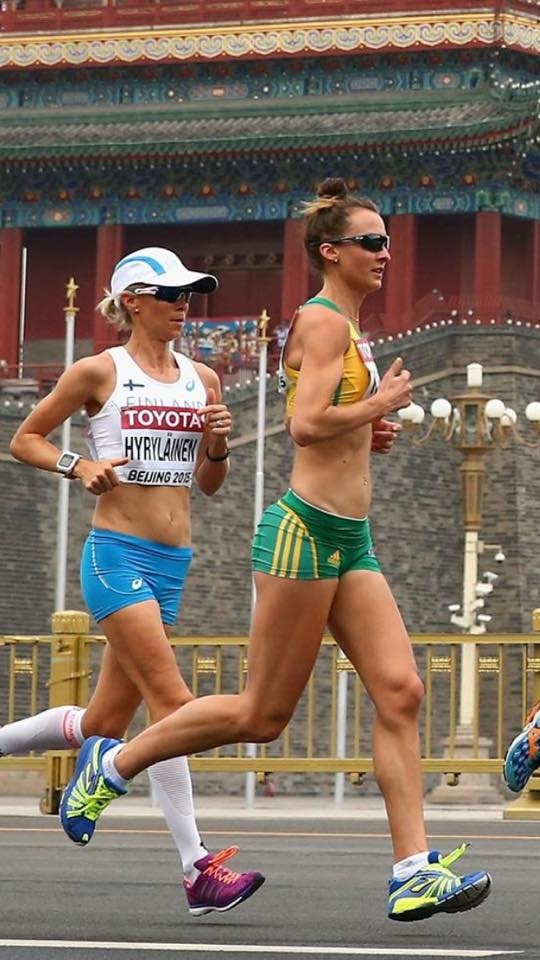 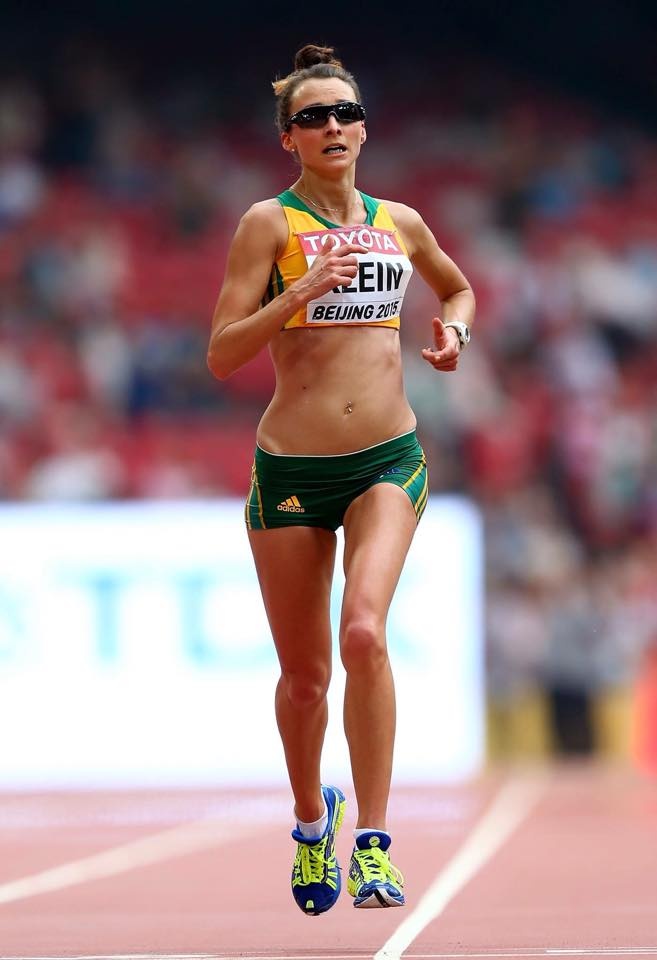 Recovery
Once I'd finished crying and hugging, my usual antics post marathon (even for other people's marathons), and taking in the moment, I received a massage and then walked back to the team hotel with my coach and mum and dad. I find that keeping walking, albeit very slowly and gingerly, helps my recovery in the days following the marathon. My post race treat was cookies and cream ice cream, mmm, so good! I now enjoy 4 weeks of easy running, and a two week getaway to California, to allow my body enough time to recover fully. It is important to respect the distance and even if I'm feeling good after a couple of weeks, I will still take the full 4 weeks to get back into some faster running. 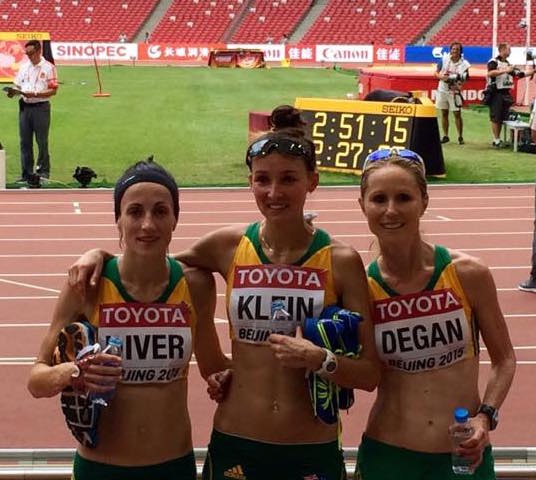 Picture: Post race.
Thanks
The list of people who support me and provide the best expertise continues to grow. I could not do what I do if it weren't for my family and friends, especially my mum and dad on the deadly treadly on my early morning double runs, my Physio Daniel Droscher from Frankston Beleura Sports and Spinal, my exercise physiologist Jamie Barnes from The Sports Injury Clinic Frankston, Hydralyte Sports, Flight Centre Active Travel, Paul Taylor from Body-Brain Performance Institute, my training partners, Frankston Athletics Club and my coach Peter Schuwalow. I am also very grateful to the Athletics Australia team staff who assisted in my preparation and to those who manned the drink stations on race day.
What's next
My immediate goal is to run well in the Zatopek in December, compete in some other track races and then aim to get fit and ready for a faster marathon early in the new year.
My plane just got turned back to Hong Kong with engine failure.
Got to go.
Sarah
Tweets by